You are here: Home / About Us / History

It is well known that ethnic minority communities in Scotland are faced with various problems such as: under representation, institutional racism, lack of coordination, lack of resources and disadvantages at various levels (health, housing, employment and education). This is coupled by a lack of understanding about the diversity of the ethnic minority communities in Scotland and lack of effective consultation and research work. Over the years these problems have played a major part in undermining the development of an ethnic minority voluntary sector in Scotland. The need for a coordinated approach to address these issues has always been acknowledged and a more direct response is required to tackle these problems and address the inequalities that exist. 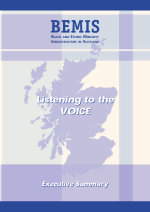 Listening to the Voice

Part of this response was the formation of the Black and Ethnic Minority Infrastructure in Scotland working group in 1997 made up of a network of ethnic minority organisations to address the gap that exists in support for the ethnic minority voluntary sector in Scotland. The need for an infrastructure organisation for this sector was identified through various consultations and research work.
“Listening to the Voice”, was a major piece of work that highlighted the importance of establishing such an infrastructure with the aim of tackling the inequalities faced by the ethnic minority communities and empowering these communities.

In response, the Scottish Executive granted core funding for the establishment of the Black and Ethnic Minority Infrastructure in Scotland (BEMIS) in Dec 2001.