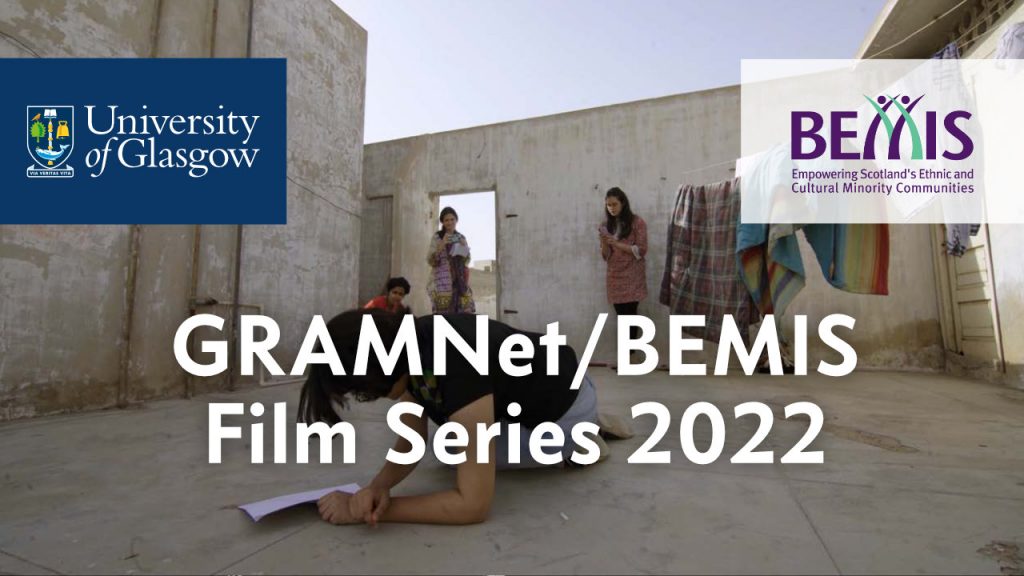 The GRAMNet film series was instigated by Dr Mariangela Palladino, then of the University of Glasgow and formerly of BEMIS. She volunteered a film screening that chronicled Ethiopian, Eritrean and Sudanese Asylum Seekers in torturous conditions. The partnership has continued over the years, adding in new supporters and sponsors but as a faithful collaboration between BEMIS and GRAMNet.

The Film Series is one of the many initiatives of this network, which every year has expanded our knowledge of the world, of different cultures, languages, struggles, and voices through film and conversation. During the pandemic, movement and other basic human rights have become even more restricted and the experience of refugees and asylum seekers from all over the world even more difficult.

This year the film series faced unprecedented struggles brought on by the pandemic. After a hiatus, this year’s series returns in its digital format to bring you monthly stories inspired by global events.

Films will be available to stream for free on Vimeo for a limited time before each event.

Detailing the preparation of the multi-city Aurat March (Women’s March) in Pakistan, This Stained Dawn tells the story of a feminist movement asserting itself in the country’s urban spaces through the eyes of the march’s organisers.

Fati, unhappy with her prospects as an irregular migrant in Italy, returns home to Ghana to take care of her five children. As a returned migrant with not much to show from her time in Europe, she is stigmatized by her gossiping neighbours and friends, who paint her as a failure. Fati forges ahead but can she cope amid a failed marriage, losing her children, and dire financial constraints? Alone and rejected, will Fati regret coming back home or will she succeed in her primary objective of getting her children back?

Travelling to Bosnia in search of his origins, filmmaker Stefan Pavlovicc meets a solitary fisherman. One man has language impairment, the other lost his hearing during the war. Camera in hand, the director films the onset of this improbable and profound friendship.

Detailing the preparation of the multi-city Aurat March (Women’s March) in Pakistan, This Stained Dawn tells the story of a feminist movement asserting itself in the country’s urban spaces through the eyes of the march’s organisers.

Join us and watch 9 Days in Raqqa in collaboration with the RILA UNESCO SPRING SCHOOL Collaboration with a live post-screening discussion on 11th May 2022. Leila Mustapha is Kurdish and Syrian. Her fight is Raqqa, the former capital of the Islamic state of three hundred thousand inhabitants, reduced to a field of ruin after the war. An engineer by training, mayor at just 30 years old, immersed in a human world, her mission is to rebuild her city, to reconcile, and to establish democracy there. An extraordinary mission. A French writer crosses Iraq and Syria to meet her. In this still dangerous city, she has 9 days to live with Leila and tell her story in a book.